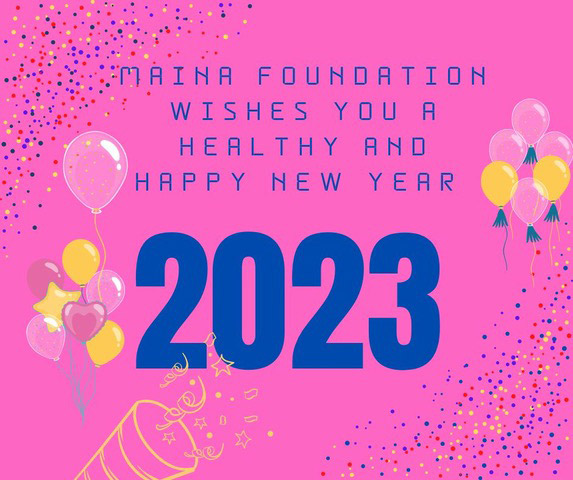 Welcome to the Maina Foundation Newsletter!

I hope you’ve recovered from the festivities of the holidays and are now, like me, fully immersed into losing those pounds you’ve added on during those wonderful weeks.

In this month’s newsletter we have exciting news from the K.J.Somaiya Medical College and Research Centre whose Breast Cancer Awareness and Screening Programme is supported by Maina Foundation.

And, I want to get us off onto a positive start with an interview with an amazing fellow author of mine.

The child of cultural anthropologists from New Mexico and the southern tip of India, she spent her childhood being dragged around the world on their research trips and now lives outside San Francisco. She writes the Secret Staircase mysteries, Accidental Alchemist mysteries, and Jaya Jones Treasure Hunt mysteries. She’s been awarded Agatha, Anthony, Lefty, and Derringer awards, and is a co-founder of Crime Writers of Color.

When were you diagnosed with breast cancer and how old were you then?

It was 2012, I was 36-years-old when, during a routine annual gynecologic visit I was found to have a small breast lump. “It’s probably nothing, but I’ll send you for a biopsy,” my doctor said.

It turned out to be stage 2 breast cancer.

What was your initial reaction to this news?

Complete shock, it was so unexpected, especially at such a young age. I have no family history of breast cancer and tests showed me to be BRCA negative.

What did your therapy include?

My life was turned upside down.

I was rushed into the process of surgery, a lumpectomy, and radiation, and also a year of chemotherapy. I had to be on Herceptin for the rest of the year and also Tamoxifen for the long term.

What were the most life-changing aspects of this therapy?

It was heartening to see I had so much support. My husband, my family, and my friends all rallied around me. My husband suggested I make a list of people who will be there for me, people I could call upon if I needed someone, people who wouldn’t mind if I threw up in their car. And it was amazing to see how long the list was.

Prior to starting chemo I went for chemotherapy class where they try to educate patients on what to expect. One of the questions in the class was do you have someone who would give you a hug, and it was so sad for me to think there could be people who don’t have someone to hug them.

Chemo wasn’t great but it wasn’t as bad as it seems in the movies. It knocks you out for a few days but then you do recover, in time to have the next dose.

I worked part time soon after my surgery partly because I didn’t want to be at home feeling sorry for myself.

One of the biggest positives out of my year of chemo when I found myself isolated, was quite a bit at home with lots of time on my hands. I threw myself into writing a book that became The Accidental Alchemist. I also self-published the first novel I’d written and that my agent had come close to selling, but publishers told us they weren’t sure how to market it. At the end of the year, I had a double celebration—being a published author as well as completing my first year of chemo. The isolation was also good training for the pandemic.

I don’t want to play down the difficulty of those times. I had huge curly hair, which was really thick. And I lost all of it. In fact, I initially cut it really short in preparation of losing it because it’s suggested that the loss of hair through chemo is less traumatic if you’ve already cut your hair.

It returned eventually, not as thick though. On the plus side I had a bit of fun around it because my writer friends bought me a gorgeous mystery writer wig, it was black with a streak of red in it.

Where are you at the moment in your breast cancer journey?

Since my initial diagnosis, I’ve given my tissue for addition to databases to expand the markers for woman like myself who are of South Asian and European descent.

One plus side is the cancer experience made me realize I needed to change my lifestyle, especially my food choices. I cut out virtually all ultra-processed foods and cook most things from scratch. And I love it.

During chemo I lost my sense of taste, everything tasted like cardboard. But that also meant I stopped eating a lot of sugary foods. It was like a reboot of my tastebuds. Now I eat much healthier and am mainly plant based. Many of my recipes are included in my books and on my website. 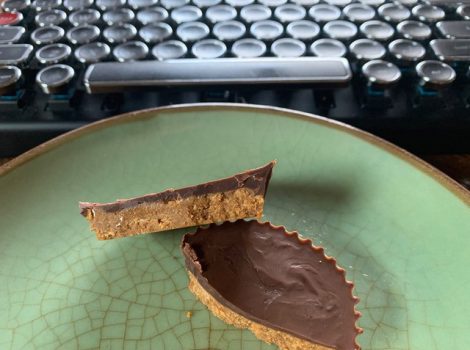 My advice to people who are reluctant to go for breast cancer screening is don’t bury your head in the sand. Cancer nowadays is treatable. It’s easier to treat if caught early so go for the screening.

And even though it may be scary, people are stronger than they think they are.

Be brave. Cancer made me realize life is short so I want to seize the day.

Tell me more about how you became an author of mysteries.

I loved mysteries when I was growing up. Both my parents are professors and our house was full of books, I used to read a lot. And mysteries were the ones that always drew me in, especially The Three Investigators and Trixie Belden.

The Alchemist of Riddle and Ruin (Accidental Alchemist #6) is now available! And The Raven Thief (Secret Staircase #2) is available for pre-order. As this newsletter goes out, Publishers Weekly has just given the book the high recommendation of a starred review.

You’re also a founding member of Crime Writers of Color, of which I am a proud member as well. Congratulations on CWoC winning a Raven award at the Edgar Awards!

Thank you! Yes, we’re very excited about that. About five years ago, Kellye Garrett, Walter Mosley and I saw a need to have a home for authors who self-identify as crime / mystery writers from traditionally underrepresented racial, cultural and ethnic backgrounds. I still can’t quite believe this little idea grew into something so wonderful, with over 350 members.

Thank you to the Mystery Writers of America, and my partners in crime Kellye Garrett, Walter Mosley and CWoC members and the crime writing community in general. CWoC is what it is because of its members, especially the volunteers who give so generously of their time and effort.

What are you reading now?

I’ve gone back to some classics, John Dickson Carr, most recently The Emperor’s Snuffbox.

I’m also enjoying a cookbook I loved: The Flavor Equation: The Science of Great Cooking Explained, by Nik Sharma.

Podcasts I’m enjoying are Science Vs. and classic Sherlock Holmes radio shows from the 1940s, which can be found on BBC Sounds.

Thank you Gigi for your valuable time and for all that you do for fellow authors!

Thank you for reading.

Happy Holidays and blessings and joy for the new year!!!

Manju Soni (she/her) pen name: M. J. Soni) is a former eye surgeon turned author. She is the author of Defying Apartheid, her debut nonfiction book that captures her experiences of being a young activist against apartheid. Her short fiction and essays has appeared in Ellery Queen Mystery Magazine, Akashic Books, Apeiron Review and The Establishment. She’s a member of Crime Writers of Color and Sisters in Crime (National and Connecticut).
https://manjusoni.com | https://twitter.com/MJSoniWrites

We have exciting news from the K.J.Somaiya Medical College and Research Centre about their 2022 Breast Cancer Awareness and Screening Programme.

Funded by Maina Foundation the program was started in 2014 as a 5-year project and further extended for 3 years. After the Covid 19 pandemic, the project was again implemented in Urban areas and rural areas with the aim to create awareness on breast cancer; and motivate attendees to undergo clinical breast examination and mammography; and motivate them to do self-breast examination.

In the beginning of the project in 2022, only one outreach worker was appointed. Later in the month of April 2022, two more staff (Health Educator and Nurse) were added to the project. Towards the end of the year, only two staff were available (Health educator and outreach worker).

A total of 959 women had breast screening, of which 83 were found to have some abnormality. These included firm hard lump with skin dimpling and lymph node enlargement, retraction of nipple with thickening of skin, mobile lump, clear nipple discharge, ill-defined swelling, pain in breast.

A total 4 breast cancer cases were diagnosed and operated for breast cancer and put on treatment in K. J. Somaiya Hospital and Research Centre, Mumbai. 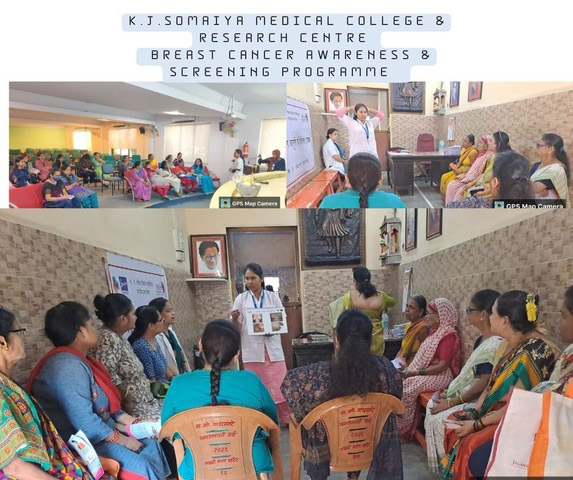 We thank you for your continued support!

SAVE A LIFE - DONATE NOW